Please DO NOT VISIT if you have any Corona Virus symptoms.

To keep our staff and guests safe we have made some changes to our restaurant operations at Webbes, and The Wild Mushroom. Things are a little different, to meet all the new social distancing rules. Please rest assured our food is still excellent and our service friendly and professional.

Our teams will be wearing face masks/shields and gloves. Our tables are spaced, to 1 metre+, facing away or back to back.  No tables larger than 6, if from multiple households. Those from two households only, may be 6 plus, but will be seated at our spaced tables not on large tables. (At our discretion)  Sanitiser is provided, meeting at the bar is no longer available, and our service needs to be swifter to minimise staff contact at your table. Your movement around our properties is now limited. Please make advance reservations at our booking system on our website www.webbesrestaurants.co.uk

Please arrive on time as per your reserved time, there are no longer any bar areas for pre-meal drinks, hence no waiting area. At Wild Mushroom, the bar is now a dining area. Garden use is restricted.

Please sanitise your hands-on entry to our restaurants. If you have to queue, please allow 2 metre distances from others, and respect instructions from our staff, when called to enter the restaurants. Our Toilet Facilities are "one in, one out”, and "touch points" will be sanitised frequently.

We hope you enjoy your next visit. We very much look forward to welcoming you.
Paul and Rebecca Webbe
Owners

Sussex by the Season ®

After seeing the nets used to catch Rye scallops, how to shuck them and discussing why they are considered some of the very best; Yvette went to Webbe’s Cookery School to see Paul Webbe’s scallop cookery lesson using some of the 4,500 scallops that Webbe’s will cook during the Festival in his Scallop School, Scallop Sauce Competition, Webbe’s at the Fish Café’s Seven Course Scallop Menu and Scallop Demonstration Lunches.

As Yvette explained "About 15,000 scallops will be cooked in Rye during the festival – about a third of them at Webbe’s Cookery School & Restaurant”!

The recipe Paul demonstrated was his Rye Bay Scallops with Sweet Soy Sherry Dressing which you can find in this blog as our Valentine Recipe. It is also featured in Paul’s weekly recipe column in Hastings Observer this week.

Paul’s advice to viewers was "They’re incredibly versatile little creatures and my big tip would be don’t overcook them…..take them out of the pan just before they are done – slightly undercooked.”

Good luck to everyone catching, cooking and eating scallops in Rye in the next nine days – have a fabulous time. 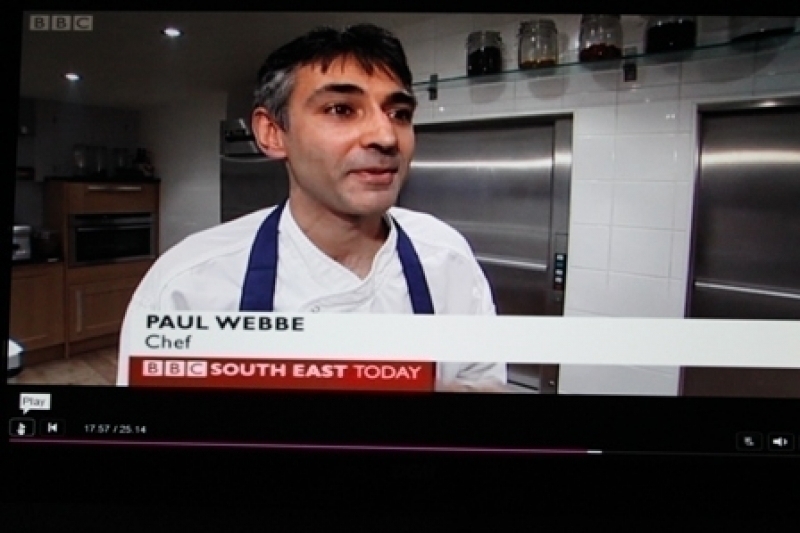